Progress on the Environmental Assessment at Toronto City Centre 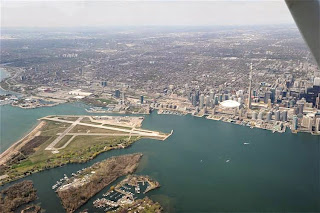 In 2013 Ports Toronto proposed an extension of Runway 08-26 in order to allow for commercial jet flights into and out of the Billy Bishop Toronto City Airport (BBTCA) (formerly known as Toronto Island Airport) in response to a request from the airport’s anchor tenant, Porter Airlines.

To assess the Porter proposal, Ports Toronto (formerly Toronto Ports Authority) secured Swerhun Facilitation to develop and oversee public engagement in determining the scope and process for the EA and Airport Master Plan. To date (February 28), since November 2014, there have been about 7 Agency Advisory Committee (AAC) meetings, an Open House Day and 2 public input sessions, and 2 of 4 Stakeholder Advisory Committee (SAC) meetings. The 14 AAC groups include, for example: City of Toronto a) Waterfront Secretariat, b) Community Planning and c) Toronto Public Health; Build Toronto; Transport Canada; Greater Toronto Airports Authority; Province of Ontario a) Ministry of Tourism, Culture and Sport and b) Ministry of Municipal Affairs and Housing. The 36 SAC include active participation by COPA, Toronto Island Pilots (TIPA - COPA Flight 32), Tourism Industry of Ontario, Porter Airlines, Toronto Financial District BIA, Air Canada, Ontario Chamber of Commerce, Trans Capital Air, Stolport Corporation, and a couple dozen environmental, boating, waterfront, neighbourhood groups. Detailed comments from all meetings (recorded during or submitted in writing or by phone) that inform the processes are found at BBTCA Runway EA website under the various drop down menus.

The Draft EA, to be discussed at the March 3 and 10 SAC meetings, will assess effects from the following two future scenarios:

I look forward to comments you may have, especially with respect to General Aviation at BBCTA.

The update of the 2012 Airport Master Plan is addressed through a conceptual design developed by Ports Toronto that could accommodate the requested runway extension, as well as noise and other mitigation measures that could be required as a result of commercial jet flights. The proposed design and operational changes to the runway are described in Ports Toronto’s 2015 Master Planning exercise. More details are found on the BBTCA Runway EA Public Meetings page under February 26 Master Planning Presentation and Master Planning Handouts.