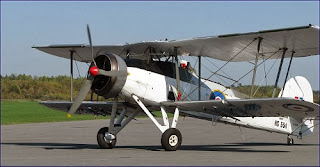 The legendary Swordfish was one of the most unique and significant aircraft of the Second World War.

This fabric covered bi-plane – which looked like an obsolete throwback to another era – was used in some of the war’s most significant engagements: Taranto, Bismarck and the Channel Dash. Lesser known, but no less important, was the role of the Swordfish protecting conveys, under tremendously difficult conditions. Throughout the war, Swordfish crews distinguished themselves with unmatched bravery in the face of great adversity.

Cdr Terry Goddard, DSC, CD is a Canadian who served with the Royal Navy. In May 1941, as a 21-year-old, this Toronto native found himself in a Swordfish, attacking the German battleship Bismarck (which was the world’s largest and most powerful warship). This is an incredible story of one young Canadian’s courage and dedicated service – in the legendary Swordfish.