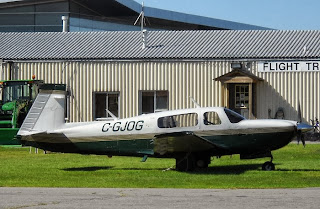 On 8 October 2013 the Mooney Aviation Company announced that they had been purchased by the Meijing Group of China, for an undisclosed sum.

The fact that Mooney had been looking for investors for a number of years is no surprise. The company had been struggling before the 2008-10 recession and then when it hit they were left with a fair inventory of unsold aircraft. On 5 November 2008 the company ceased production and laid off most of its workforce and the building of new Mooneys has not resumed since. The company has remained in business as a parts supplier to its existing fleet, but by January 2011 had only about ten employees left at work at the Kerrville, Texas plant.

The purchase by the Meijing Group, a Chinese real estate developer based in Zhengzhou, Henan Province, must come as a great relief for Mooney. Without this sort of buyout the company probably didn't have a future. The company is now planning a return to production of the M20 aircraft series.

For the Meijing Group this is a move to diversify the company and their first foray into the aerospace field.

Once again, though, it is apparent, as Mooney looked for a buyer for the past three years, that no one in North America or Europe was going to step in and buy the company. As has been the case often in recent years it has fallen to middle eastern and, more commonly, Chinese interests to buy up western aerospace manufacturers and keep them in business.

Here is my current list of western aerospace firms bought out so far by non-western interests:

According to the Wichita Eagle Mooney has received an investment from Soaring America Corporation which will allow it to restart production of the Acclaim Type S and the Ovation 2 and Ovation aircraft. It is unclear if Soaring America is related to the reported Meijing Group take-over or not as Soaring America President Cheng Yuan (Jerry Chen) indicated to Russ Niles of AVweb this week that he couldn't provide more information at this time.

The details of Mooney's purchase are becoming a bit more clear as time goes by. According to AVweb Mooney has been purchased by Soaring American Corporation, a new company started in California last year with Cheng Yuan (Jerry Chen) from Taiwan as President and CEO. Chen, a PhD in aeronautical engineering, is now the new CEO of Mooney as well. It seems Chen represents a group of Chinese investors that may well include the Meijing Group, who have plans to restart Acclaim and the Ovation production and market the aircraft predominately to the Chinese market, which they feel is ripe for private aircraft and advanced trainers.

This video interview with Chen by AVweb outlines some of the ideas they are working towards: