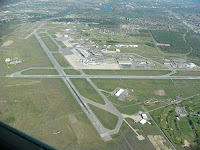 The Ottawa International Airport Authority has announced that they will not raise GA fees at the present time.

The Airport Authority had indicated last year that they intended to raise fees in line with the Consumer Price Index (CPI), which a year ago had been running at 2.5%. With the cooling economy though the CPI registered only 0.5% over 2012. The authority explained:

We are pleased to announce that, because this increase was so small, we have decided to defer the increase until February 1, 2014. February 1 coincides with the timing of our annual changes to all other aeronautical rates. Accordingly, at the end of November We expect to announce an increase in general aviation fees as Well as any applicable changes to other aeronautical rates, to take effect on the following February 1. We will base the increase in general aviation fees on the increase in CPI from January 2012 to October 2013. On a go forward basis, We plan to continue to use February 1 for any subsequent fee changes for General Aviation. We trust that you will find this deferral to be acceptable.

Canadian Owners And Pilots Association President and CEO Kevin Psutka responded to the announcement, saying, "thank you for deferring an increase. Any relief on the cost of aviation is appreciated."

OK, we in GA are pleased with lower fees!

I'm not sure GA minds paying the cost of serving it, even if it is tiny.
Has the authority figured out what it has lost by introducing a landing fee for GA? How many aircraft owners have moved to other airports or just quit flying as a result of the landing fees? How have the revenues of the fixed base operators and the Ottawa Flying Club, dropped due to the landing fees? While it is good to see the tiny increases in cost will not be passed along, I think I would rather see more complete cost benefit analysis of the fee structure.
Finally, when one looks for fixed base operators on the Authority's website only Esso Avitat, Express Air and Innotech Aviation are shown. Why is the Ottawa Flying club not listed? Is there some unstated plan here?

Some very good points there that mirror the same questions and concerns brought up more that a year ago. Still no answers there, no proper cost analysis, no consideration of the basics of economics, though.