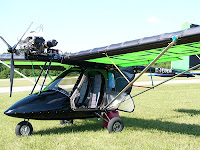 I have written here about the recent and extensive buy-out of the North American aerospace industry by middle-eastern and far eastern interests before. It is always interesting to note this business trend and how North American investors just won't go near their own aircraft manufacturers, while foreign investors, especially Chinese investors, will.

Recently I discovered that the Flightstar Sportplanes website was up for sale and after a web search turned up no news at all I wrote to owner Tom Peghiny to find out what that meant.

Thousands of Flightstars have been built and flown since the type was introduced in 1987. They are very popular in the USA where the single seaters can qualify under FAR 103 Ultralight Vehicles rules.

It seems that Flightstar's business dropped off in the early part of the 2008-2010 recession, to the point of mostly just supplying parts and few new aircraft. A contributing factor was the introduction of the US light-sport aircraft rules and the elimination of the two-seat trainer exemption under FAR 103.

Flightstar Sportplanes had been working with Yuneec International of Kunshan, Jiangsu, China on an electric version of the the FlightStar Spyder, called the eSpyder and it seemed a promising aircraft for the future. Flightstar provided the airframe and Yuneec the drivetrain.

When Flightstar sales dropped off Yuneec bought out the Flightstar aircraft line in 2009, including the rights, tooling and the parts inventory. Flightstar Sportplanes business was quietly wound up the same year, with neither company putting out a press release on the deal. The aviation press seems to have missed it altogether.

Yuneec is engaged in developing the single seat eSpyder, and they now have a web page on it that explains design changes coming:

Perhaps the two seat Flightstar II model will be re-introduced with one of Yuneec's own brand of Power Drive electric engines as well.

So even on the very light end of aviation it once again looks like Chinese investors have moved in where no one else will, kept existing products flying and continued innovative development.

Here is how the foreign ownership list now looks:

Who will be next?