Aviation Is a Big Issue in The 2011 Election 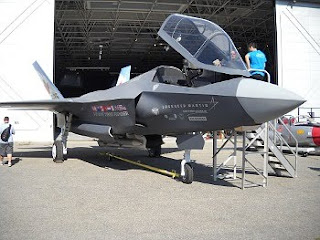 The federal election was kicked off today with Prime Minister Stephen Harper's trip to Rideau Hall to ask the Governor General to dissolve Parliament. This was after Harper's government was defeated on a non-confidence motion for not disclosing the costs of new prisons and aircraft. That's right, aircraft. As a result this election campaign is going to feature a lot of discussion about aviation. In fact, this will probably be the first election since Diefenbaker was tossed out in 1963 where aviation will be a central issue.

The Globe and Mail framed the issue succinctly: "Liberal Michael Ignatieff says his party will move a motion of no confidence on Friday, one that will declare the government to be in contempt of Parliament for withholding information related to the cost of Conservative crime legislation and the purchase of 65 fighter jets."

The Canadian Press indicated: "The battle over the cost of the Harper government's stealth fighter has escalated into a war of numbers between the Parliamentary Budget Officer and the Defence Department. Kevin Page today released a rebuttal to senior defence officials, who questioned the math in his latest report, which says the cost of the F-35 Lightning II could reach $30 billion over three decades...The F-35 program in the U.S. has seen huge cost overruns, which Page says will drive up the price tag from an estimated US $75 million to US $148 million for each plane. The department dismisses the figure, but Page pointed out today the Pentagon's latest estimate is US $151 million [per aircraft] and that Washington does not sell aircraft to allies at a price less than what it pays. The jet-fighter deal is expected to be a big issue in the expected spring election because the Liberals have promised to cancel it."

Here is what the opposition has to say on the issue:

so you can see how the battle lines are drawn.

In short it is the biggest government contract ever and it is a sole-source, untendered contract which will see the the aircraft built in the USA and no guaranteed industrial offset contracts for Canadian companies. Instead they will be able to bid on F-35 work against companies in other nations participating in the manufacturing program. The government claims that the F-35 is the only aircraft that meets Canada's specifications, so a competition is not necessary, but they have made the specification "secret" so it is hard to tell.

Critics have noted that the F-35 is short-ranged and single-engined, a factor that has eliminated competitors for past fighter contracts, such as in the late 1970s when the F-16 was ruled out for Canada because of its single engine and we bought the twin-engined F-18 instead.

The F-35 is a stealth strike aircraft, not an interceptor and that brings up the question of what mission does Canada need a stealth attack aircraft for, when our primary role is the air defence of Canada?

Price is obviously an issue with the F-35 program behind schedule and over-budget. Unit costs have risen to somewhere around US$150M per aircraft, although the government claims that when the contract is signed in 2013 the price will be US$75M per aircraft.

Another major issue is access to the source code for the software for maintenance and in-flight remote control of the aircraft. On 24 March 2011 Turkey announced it is placing its order for 100 F-35s on hold due to the refusal of the US to provide the software codes to any of the countries buying the aircraft. (This includes Canada). Turkish Defense Minister Vecdi Gönül said without the software source code Turkey could not accept the aircraft and will cancel. This should be a big issue for Canada as well, as without these codes the aircraft cannot be fully maintained in Canada, not to mention that the US, or even hackers, could prevent them from being started or control them in flight, changing their targets enroute.

All of this adds up to a very big issue, one that will put aviation at the front of this election, something we haven't seen in many years.

A really complete summary of the Canadian F-35 procurement controversy can be found in this article.
Posted by Adam Hunt at 11:36

Last Fall, The Economist ran a great piece on why jets like the F-35 are a bad idea in general: Air Power on the Cheap.

In our case, Canada needs long-range propeller aircraft for patrols and S&R (especially with an all-season Northwest Passage opening up in our generation), and propeller or jet aircraft for transport (for UN and NATO obligations). I don't see where short-range, high-cost, high-fuel-burn F-35 strike aircraft fit in.

Let's forget about useless toys and buy the aircraft we really need, and then use some of the money we save to improve the pay and working conditions of our troops, and the rest to avoid running up the national debt any further.

Personally I think we do need fighters for air defence, but that the F-35 is exactly the wrong aircraft for the job. It can do interceptor work as a secondary role, but it is slow, short ranged and amazingly expensive, compared to the other aircraft available for the role.

Buying a single-engined aircraft for our country, which is 80% swamp, is craziness. We need some thing that is faster, twin engined and given the state of the art probably unmanned. If you want to see what will replace the F-35 have a look at this video.

Well I think we have hit a new level of cynicism in politics. Lockheed Martin, the US aerospace manufacturing giant that stands to make billions in our tax money from the untendered, sole-sourced F-35 fighter purchase has decided to run their own candidate, just to make sure the plane doesn't get cancelled.

A new poll shows that the majority of Canadians oppose buying the F-35.